Our research is focused on finding new clinical strategies to reduce chronic pain and for general pain management treatment. By carefully considering the pathology of the pain and treating the whole patient, we have been able to treat many patients with state-of-the-art therapies, including using advanced technology and modalities, that are successful in reducing or blocking pain and dramatically improving their quality of life.

The Banks laboratory is interested in how sensory stimuli are represented in the firing patterns of cells in the neocortex, and how general anesthetics disrupt this coding process.

My research interests focus on the incorporation of regional anesthesia techniques in the perioperative treatment of pain to improve patient outcomes as well as further evaluating patients’ understanding of pain and their postsurgical experience.

Our mission and our passion as a research group is to find a solution to prevent catastrophic outcomes by developing a clinically useful respiratory monitoring device. 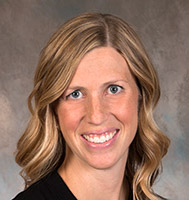 Our research focuses on understanding the effects of vitamin C on biochemical and cellular damage in liver transplant recipients to optimize graft outcomes of this scarce resource.

Our current research focuses on quick implementation of therapy trial protocols to expeditiously bring novel treatments from the laboratory to the patient. We concentrate on phase 2 and phase 3 clinical trials. University of Wisconsin-Madison is ideal for these types of trials because of the efficient Office of Clinical Trials staffed with highly skilled and motivated coordinators.

Our research is focused on understanding changes in red cell mass and improving the storage and post-transfusion survival of blood. We are investigating a novel technique for red cell mass measurement. Validation of this technique will have major implications for studies of red cell physiology, measurement of blood loss, volume status assessment and progress toward better transfusion therapies.

The Hogan Laboratory focuses on responses to anesthesia and surgery arising from genomic and epigenomic variation.

Our research seeks to validate the immediate action of heparin and thereby the ability to safely go on cardiopulmonary bypass more rapidly than currently practiced even in patients with reduced ejection fraction.

Seeking novel treatments for chronic pain, we aim to understand the transition from acute to chronic pain by studying inhibitory neurons in the brain. An additional interest is the analgesic potential of subtype-selective GABA modulators.

Research in the Pearce laboratory is focused on the mechanisms by which general anesthetics alter brain function. We are particularly interested in understanding how modulation of GABAA receptors impairs memory – a fundamental endpoint of anesthesia. For our studies we utilize expressed recombinant receptors and hippocampal brain slices to investigate the roles of specific subunit combinations and cell types in the control of learning and memory.

We have observed that commonly used volatile general anesthetics (VGA) affect outcomes in a model of blunt trauma with traumatic brain injury (bTBI) model implemented in the fruit fly Drosophila melanogaster. While trauma in fruit flies does not equal trauma in humans, all metazoans had to evolve responses to life-threatening injuries and successful responses have been conserved with modifications throughout evolution. Because of evolutionary conservation, findings initially made in flies have made possible clinically important discoveries in higher organisms. Specifically for humans, these discoveries have included Hox gene control of body plan development; Toll pathway mediation of the innate immune response to pathogens; period and clock gene coordination of circadian rhythms; chromatin-based regulation of epigenetic inheritance; and Wnt, Notch, and Ras signal transduction pathway influence on cancers. Furthermore, results from flies have been successfully translated to humans even in cases where findings were based on studies of tissues such as fat bodies, salivary glands, imaginal discs, and wings that have no direct counterpart in mammals. The fly brain, in contrast, has a direct counterpart in the mammalian brain and similarly mediates systemic responses to injury. As a result, we have every reason to believe that key cellular mechanisms activated by anesthetics will be conserved between flies and humans, as evidenced by our existing data showing that pharmacodynamic and pharmacokinetic properties of anesthetics observed in flies are similar to those observed in humans (e.g., our finding that mutations in mitochondrial genes in flies cause hypersensitivity to anesthetics similar to an analogous mutation in humans) (Olufs Z. et al. SciRep 2018). The fruit fly model, with its fully sequenced genome, extensive catalogue of available mutations and an unparalleled genetic toolbox allows far greater experimental flexibility than models in higher animals.

Our research is focused on pediatric perioperative pain management strategies. By studying risks and complications in national and international databases, and through direct clinical research, our goal is to advance current anesthesia and prescription practice and improve care for the youngest patients.